Ellie at Not-So-Modern Girl tagged me in this super neat Literary Dinner Party Tag awhile back and I finally wanted to tackle it in true Geeky Gal style! I’m twisting this tag a bit so that instead of inviting literary characters to a dinner party, I am going to invite video game characters!

END_OF_DOCUMENT_TOKEN_TO_BE_REPLACED

If you’ve been reading every day since I first set out on this 30 Day Video Game Challenge, it’s no secret that I don’t enjoy shooters. They’re just not for me. So of course Fallout was not the game for me. Or so I thought. 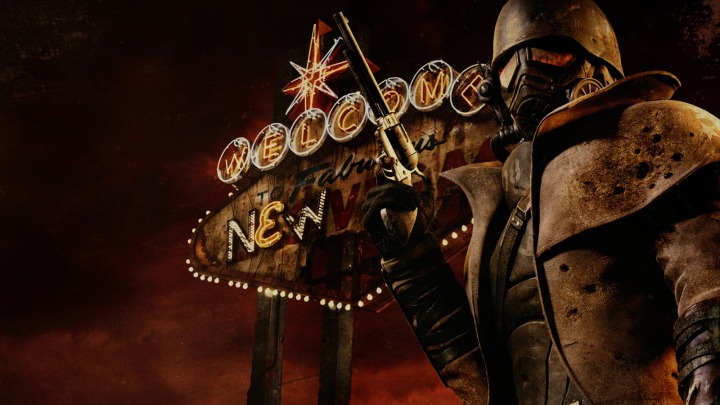 I was talked into trying Fallout: New Vegas by my husband (then long distance boyfriend) years after it had come out. I had low expectations of this game. Sure, I loved Skyrim by Bethesda, but sneaking around with my bow was so different from running through the desert with a gun. I was so wrong.

The first thing we did was mod the hell out New Vegas on my computer. I let Alec pick several mods for me to download first and then I went after aesthetic mods. I love character modeling so I made sure to get lots of hair, faces, and other character-related mods. Then I tackled a few environment mods and loaded them all up on my little lap top.

It was a lot of fun playing New Vegas. I essentially let my companions take on the violence while I ran around questing and talking to everyone. If I did had to fight, I tried to use melee means to get things done. The VATS system was extremely helpful as I can’t aim for anything.

I wouldn’t call myself “converted” but New Vegas was a step towards First Person Shooters for me. Maybe I’ll be more open to giving them a try.

What game did you think you wouldn’t like, but ended up loving? Let me know in the comments!

Briefly mentioned in another post, Outlast has been insanely popular for Youtubers and Let’s Player’s alike and not without reason. Outlast was praised for its horror elements and game-play, but also criticized for its environments and character models.

Using only a camcorder, players must navigate through an insane asylum riddled with enemies. Players can only run or hide but enemies will come looking for you. Squeezing into small spaces and closing doors can deter your attackers for a few moments. The camcorder has night vision and can record important events. Be aware though that batteries can become difficult to find and some black out areas basically require night vision on the camcorder in order for you to navigate.

Outlast was one of the first “modern” horror games I enjoyed. There’s plenty to gripe about but the actual survival horror part of the game was fantastic. I obviously didn’t play this one on my own. I played it with my brother (then later played Whistle Blower). He was the cool and calm one while I shrieked at every jump-scare.

I already have a strange fascination with serial killers (looking at you Criminal Minds and Serial Killers Parcast) so being inside the psychiatric hospital with those who actually belong there with dead personnel literally everywhere was unsettling. Reading the documents and slowly piecing everything together kept me on my toes. The few “main” enemies we encountered made me feel gross and disturbed.

Overall, it’s a great game. The character models could have been better, but I personally didn’t have much to complain about. Did the game take some cheap shots with jump-scares? Sure, and maybe they even numbed you a bit because you “knew” they were coming. I knew they were coming, and they would still scare the shit out of me. Don’t play this one alone.

What game scared the crap out of you? Let me know in the comments!

Finally, a post that I have wanted to write for ages! And one game that has yet to get its own Saturday Suggestion. One of my all time favorite game series is Kingdom Hearts. I fell head over heels for the first game. It’s been a bit of an obsession since then.

An action RPG has done the impossible: marrying Disney and Final Fantasy. Being a huge Disney fan, and just getting my feet wet with Final Fantasy, I was super interested in picking up this game. The tale of Kingdom Hearts is a wholesome one, though a bit complicated. Simply put, it’s the “story of Light overcoming Darkness with the power of Friendship.”

The first game follows Sora, a keyblade wielder, Donald, and Goofy as they travel to Disney worlds to stop the Heartless invasion by sealing each world’s keyhole. While the controls are a bit wonky and the story is a little hard to follow at first, I quickly got the hang of it and finished the game with tears in my eyes. I knew there would be a sequel so I just held in there as best as I could (because for real that ending was heart breaking but powerful and I just LOVED it).

The later games fix a lot of the game play issues that the first game encountered and the story becomes much more complex. KH has a huge fan following, and there’s tons of videos that help break the story down if you’re having trouble. Overall, the story is fantastic and one of my favorites as far as action RPGs go.

Kingdom Hearts is a must for all Disney/Final Fantasy fans. Just be forgiving with the very first game. We all start somewhere.

What is your favorite game series? Let me know in the comments!

Silent Hill 2 gets named dropped pretty often around here as being one of my favorite horror games. Does it qualify as classic? I personally think so. It literally set the precedent for several horror games that came after it and still has a heavy presence in the horror game community. Let’s look at some of the unique things that make SH2 a classic game.

The fog of Silent Hill literally made Silent Hill… well… Silent Hill. The fog became an integral part of the game. What was created to cover up limited draw distance ended up shaping the town and giving it its creepy and dream-like vibe. Playing on PS2, we could only shudder at what could be lurking in the fog and jump at the sounds of things we could not see.

Maybe the controls were just clumsy or maybe the developers were just lazy, but you can’t deny the feeling of helplessness as you explore Silent Hill through Jame’s eyes. James is far from soldierly, making the gun and ammo you find pretty useless until you get used to the shooting mechanics: take out the gun, manually aim, and shoot. That’s 3 buttons to try to kill an enemy.

James really only has one way of staying alive and that is to RUN. As you find yourself fleeing from Silent Hill’s enemies, you get to the nearest door and… it’s locked. Several doors remain locked in SH2 even after you finish the game. The multiple and identical-looking hospital wings also leave you feeling pretty disoriented. James is very vulnerable with no real way to protect himself from the monstrosities that seem to lurk around every corner.

Speaking of enemies, Pyramid Head is still one of the most terrifying enemies you will ever encounter. Guilt personified, he’s essentially invincible. But symbolism is heavy in SH2 and doesn’t stop there. The nurses are representations of James’ repressed sexuality. Maria is a reminder of his deceased wife: who she was and who James’ wanted her to be. Laura is the loss of James’ innocence. They all seem to be a representation of James himself.

The mind games of SH2 don’t stop with the characters. The insane multiple endings are not hinged upon what you do but rather how you do it. Without giving away any spoilers: how you handle your health, how you treat other characters, and James’ state of mind all aid in what ending you’re likely to get.

Modern games make us over powered, the hero, and the good guy. Silent Hill 2 takes away our power and leaves us with a sense of dread. Are we really the hero in this story? We are made to feel uncomfortable, disoriented, and helpless. SH2 set the ground work for all horror games after it. The fog gives you chills as you hear ungodly things rustle past you. You are made to feel helpless even when you have a weapon. Environments continuously keep you on your feet but confused. Enemies and characters alike screw with your fragile psyche and leave you with more questions than answers.

And it makes playing Silent Hill 2 one of the best horror game experiences I’ve ever had.

What is your favorite classic game? Let me know in the comments!