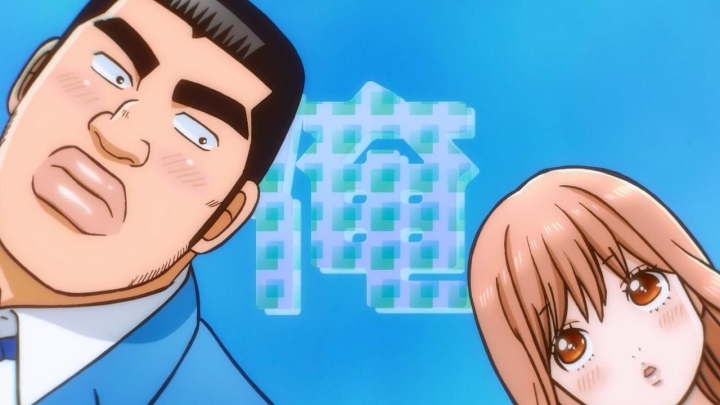 Tired of the stereotypical shoujo boys? How about an intimidating high school guy with a heart of pure gold?

Brief intro: Meet Takeo Gouda, a tall and intimidating high school freshman who is a courageous hero to boys, but not a huge hit with the girls. With his best friend Makoto Sunakawa, Takeo attempts to navigate his lack of a love life. Unfortunately for Taeko, Sunakawa is every girl’s dream guy, much to Sunakawa’s disappointment. Comparing himself to his best friend takes Takeo’s confidence down a notch even though Sunakawa has shot down every girl who has confessed her love for him!

After saving innocent Rinko Yomato from a pervert on the bus, Takeo finds himself falling hard for the cute baker. However, he suspects that she is in love with Sunakawa. Putting his own feelings aside, Takeo decides that he will help Yomato win Sunakawa’s heart! But does she really like Sunakawa? Or are all those special treats really for Takeo?

This anime put a bright spot into my Fridays while Alec and I were long distance. Every Friday, we got our dinner, sat in front of skype, and watched this delightful anime together. I can’t recall how long it took us to finish the season, but we recently picked it back up now that the distance is permanently closed. My love for this anime was immediately renewed.

Takeo’s character is so easy to love. He’s so big and strong, an instant hero to all the boys young and old. He can’t ever seem to “get the girl” though! They flock to his best friend Sunakawa instead. Sunakawa reminds me of my own best friend in some ways. He’s very loyal to Takeo. The girls find him handsome and charming, even though he’s very sarcastic and always bored. Not once has he reciprocated a confession from a girl who likes him!

Takeo has grown used to the girls always preferring Sunakawa’s traditional shoujo looks. Takeo is tall and built like a sumo wrestler. He looks intimidating to most girls, that is until he saves Yomato from a molester. Yomato obviously likes Takeo but is way too shy to say it. Instead, she continuously makes reasons to see him. Takeo, used to being overlooked, assumes she must like Sunakawa. In an interesting turn of events, he pledges to help Yomato with Sunakawa, putting aside his own feelings for the girl.

I found myself immediately rooting for the two of them and also wanting to smack Takeo upside the head. I loved the frustrating first episodes of watching the romance bloom. It’s beautifully done and very similar to its manga counterpart art-wise. It’s a bit of a different art style than the other anime I have recommended before. The music is sweet and complements the art wonderfully. I really adore the whole package of this romance anime.

If you have a soft spot for funny romances, My Love Story!! should be on your list.

Bottom Line: It’s not your typical romance, and that’s a good thing.