If you haven’t heard of OWLS before, it stands for Otaku Warrior for Liberty and Self-Respect. We are a group of content creators promoting the acceptance of everyone regardless of their disabilities, ethnicity, gender, sexual orientation, and religion. Each month with the help of pop culture, literature, and other forms of media, we explore real-world topics through these online tours, sharing personal experiences and analyzing pop culture.

If you want to know more about OWLS, you can take a look at the blog here.

If you had told me that I would be working from home self isolating for what could be almost half the year back in January, I wouldn’t have believed you. I had so much to look forward to: Animal Crossing in March, a BTS concert in June, seeing family and friends for holidays… Even going thrift shopping has been cancelled as we all try to stay inside for everyone’s health. But that’s exactly what happened. Plans were cancelled. Life feels cancelled, but at least I still had Animal Crossing to look forward to in March… A light in the darkness for most gamers and “non-gamers” alike.

Earlier this month I gushed about Animal Crossing and how it had such a big impact on my life. I briefly touched how much it was helping me cope through this period of self isolation and I even did a review on the game so far, but I thought this month’s prompt would be the perfect opportunity to open up about how Animal Crossing: New Horizons was helping me keep my head above the water.

April’s Prompt on Hope: We are in the midst of a pandemic which has led people to live in fear and anxiety over the coronavirus. For this month, rather than seeing the dark side of the situation we are living in, we will be exploring anime and other pop culture mediums that bring hope for humanity and why they have such a positive impact on us. 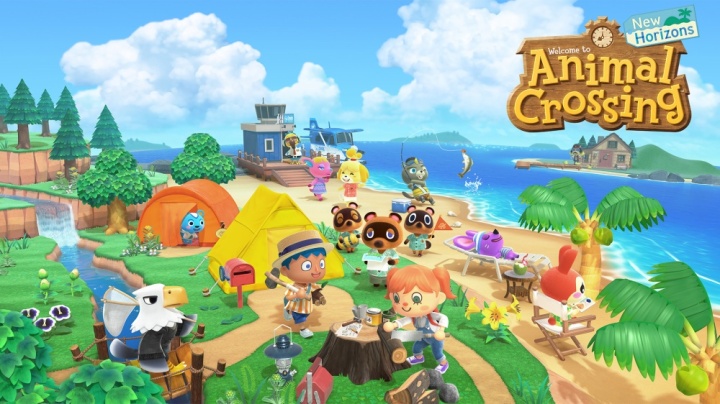 Brief intro: Welcome to the world of Animal Crossing (again)! You have joined Tom Nook and two villagers in occupying and building up a tropical island. You can create you character unlike in previous games where answering a few questions determines your appearance for you. You also get to choose an island layout similar to New Leaf where you can pick your town’s layout.

Now that you’ve made it to the island… what’s next? Gathering resources, discovering mystery islands, finding DIY recipes, building and crafting, inviting animal residents to your island, and more! Life happens in real time with holidays, events, seasons, and even wildlife that corresponds to dates and times. Make the most of your time on the island by doing exactly what you want. — Saturday Suggestion – Game: Animal Crossing New Horizons

As I mentioned in my review, I had every intention of getting a Nintendo Switch and a copy of Animal Crossing: New Horizons in March. Unfortunately, life had different plans.

Padme, my 7-year-old long-haired chihuahua went to the vet for a scheduled teeth cleaning for Stage II Periodontal Disease in February. A couple of hours later, the vet called concerned about some bruising on her belly. I assumed she had jumped off of something (as she tends to do) and had finally hurt herself doing so. I was very wrong.

The vet said she believed she had an autoimmune disease but had to run several test to rule everything else out before diagnosing her. The disease is deadly, and I was scared for my fur baby. I ended up leaving work to go see her, and stayed for as long as the vet would let me. I was able to pick her up that night and bring her home. You would have never thought anything was wrong. The tests all came back negative which meant she had the autoimmune disease that could very well take her life if we didn’t do something about it.

From then until now, Padme has been battling this autoimmune disease and is on bed rest until further notice. I have cried myself to sleep countless nights. I have slept with my hand on her belly to be sure she was still breathing. We have spent thousands of dollars for her treatment and routine blood tests. Right now, I can’t say that she is for sure getting better, and that is a terrifying thought. I can’t imagine life without her.

So when March came, and my friends asked me if I was getting a Switch for Animal Crossing, I had to tell them no. At this point, I couldn’t afford it or justify the price when Padme had so many current and possible future medical costs to consider. My husband, who is an absolute Saint, convinced me to get one and said that it was justified considering how much I had wanted this game. We could make it work financially. Little did we know that due to the self isolation that we were under due to the coronavirus that most, if not all, Switches were sold out across our state. Thanks to a little help from a dear friend, Alec was able to order the very last one from Kohl’s and have it delivered to us the day after Animal Crossing was to release.

Now with the console and the game in my hands, I happily booted it up and said hello to my little island which I promptly named Padme Isle.

An Escape from Life

New Horizons has been an escape for me during this time of self isolation. I have been working from home for about six weeks now I think. All the days run together. I have been feeling stir crazy. I miss my friends. I miss going to the gym. I miss taking Padme for walks.I am stuck in a rut of not wanting to cook or clean or sometimes I would rather cook and clean instead of work. It’s been a bit of a mess until I found some better ways to cope if I’m being honest with you.

A Sense of Accomplishment

Playing New Horizons lets me get out of my head even if it’s just for an hour. I can focus on mundane tasks like finding the fossils on my island, checking turnip prices, talking with each of my islanders, and visiting the Able sisters. Then if I am up for it, I’ll spend time designing my home and island or heading out to mystery islands to see what I can find. I might even just fish for awhile, walking up and down the beach, just trying to catch every fish I see. I might shake every tree on the island to find furniture. I might collect resources from the trees and rocks.

Accomplishing small tasks for Nook Miles feels good too. Maybe I’m not feeling accomplished with my real life to do list, but at least I can be rewarded virtually. I like to use my Nook Miles on DIY recipes and little things to decorate my island. It’s a way I can spend “money” on myself even though I can’t leave the house to do any real shopping.

New Horizons has attracted so many new people during the lock down as well. People who don’t consider themselves “gamers” have picked up the wholesome game and have been creating the most beautiful islands if Facebook groups and reddit posts are to be believed. It warms my heart to see people all over the world pick up a game and now have the option to share it with anyone they choose.

About two or three weeks into getting my bearings on my island, Alec got me the subscription so that I could finally play with my friends. Several of them have the game, so even if we can’t hang out in person, we can hang out on each others’ islands while talking on Discord. it doesn’t replace in real life interaction, but it’s as close as we can get for now.

I’m incredibly thankful to have New Horizons in my life at a time like this. It has given me more purpose, an escape, something to look forward to, a place to see my friends, and, most of all, hope. I have hope that this lock down will come to an end and life will have a new normal. I have hope that until then and after I will have my island of islanders and friends to keep me company until we can be together again.

If you have never played an Animal Crossing game before, I highly recommend you try New Horizons for yourself! If you haven’t experienced an OWLS blog tour before, please check out the other members’ posts and their takes on hope.

What is helping you get through this pandemic? Has Animal Crossing also been the hope you’ve needed during this time? Let me know in the comments below!