In March, A Geeky Gal was nominated for the Real Neat Blog Award by Meagan at Quibbles and Scribbles!  Meagan is a fantastic writer of reviews for all kinds of fandoms like books, TV shows, games, plays, and more! Thanks again Meagan for the nomination. Sorry for taking so long to get to it. It’s very much appreciated! 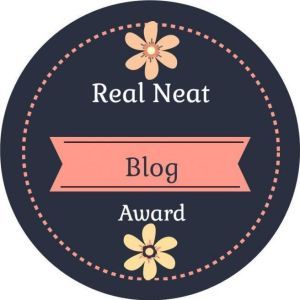 What’s a song you’re embarrassed to say you like? (We won’t judge.) Pretty much any of the country music I listen to. I’m from Alabama originally and still like to kick it back to Florida Georgia Line. When I get home sick, I tend to listen to older country songs a lot.

How would you describe yourself as a child? Quiet, smart, a people-pleaser, teacher’s pet, a bit of a loner, sad.

And what were your favorite toys/things to do? I loved to read. I’d go through books in a day.o loved to play video games like Spyro and Frogger. I played with Barbies and Bratz but mostly it was just setting up their houses, dressing them, and coming up with stories for them.

What is your favorite dog breed? Chihuahua, of course!

If you won the lottery, what’s the first thing you’d do with it? Besides pay off my student loans? I’d take my husband and I to Disney World after the planet finally opens back up. I’d also like to pay off my car and put a large down payment on a home (or buy one outright if I can). Pretty much I’d spend it on ways to make me feel financially secure but also go to Disney.

Would you rather be a hero or a villain for a day? Most definitely the hero. I’ve been watching West World and have realized I’d rather be a white hate, trying to be the best person I could be than be a black hat and just wreak havoc on everyone.

No nominations this go around y’all. I have so many awards and tags to still catch up on. I’ll see ya in the next one!