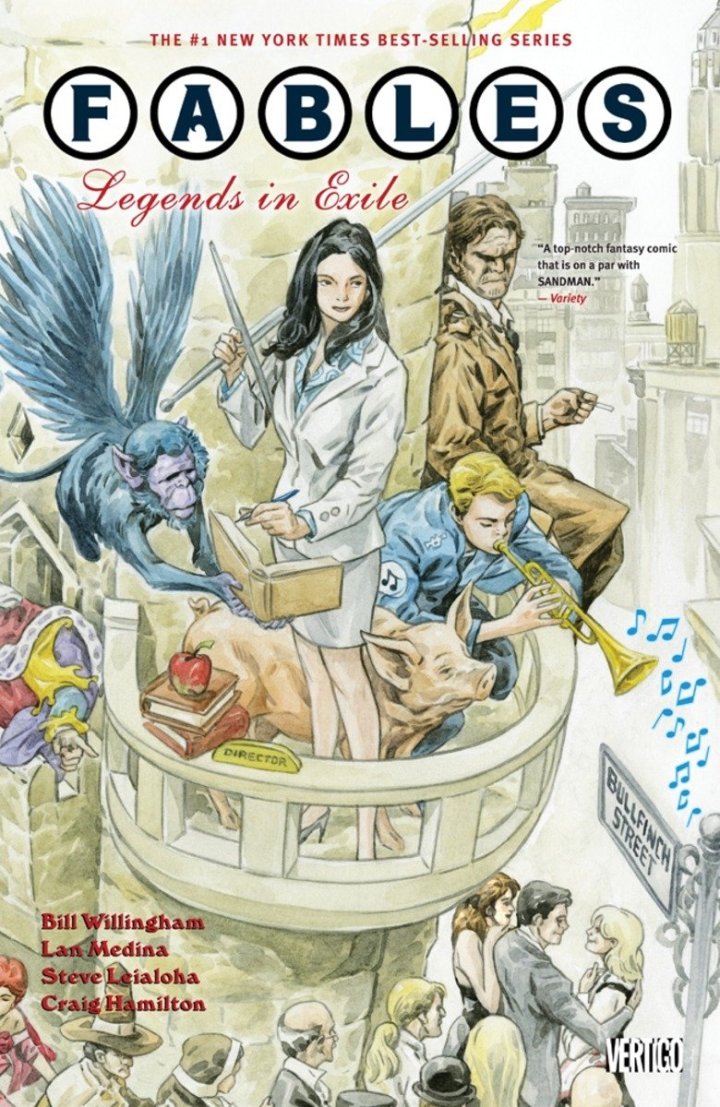 *Some affiliate links have been used. Check out my about me page to learn more about these links.

If you’ve played The Wolf Among Us, you may not have realized it’s actually a prequel to the long-running Fables comic series that was completed in 2015 with several spin-offs. (To read Fables and all of its spin-offs in order, follow this link.) I had been wanting to get my hands on the first issue of Fables for awhile to continue with the characters I’d gotten attached to during The Wolf Among Us, and a trip to the comic book store for some D&D dice gave me the opportunity to snatch it up.

At Christmas, I was given two of the first compilations so look out for those reviews soon!

Brief intro: As a lover of fairy tales and all things Disney, I was excited to dive into this nitty-gritty version of my favorite stories. These characters call themselves “Fables” and live in a New York community known as “Fabletown.” They created this community centuries ago after their homelands were taken over by a villain known simply as The Adversary.

The first story arc is called Legends in Exile and expands from the first issue to the fifth issue. We meet our first two main characters: Bigby Wolf, the sheriff of Fabletown, and Snow White, the assistant to the Mayor of Fabletown. Bigby begins the investigation of Snow White’s sister’s, Rose Red, apparent murder in a grungy, who-done-it, murder mystery.

Review: Before I even get to the writing, I have to tell y’all about the artwork. It is exquisite! Beautifully done, gritty, different, and it really goes along with the themes that make Fables the comic that it is. Several artists have contributed to the comic over it’s long run but this particular issue has me sold. The colors, the line work, how the text is incorporated into each panel, are simply works of art in themselves.

The writing is just as phenomenal as the artwork that compliments it. Mystery and intrigue with dashes of romance will make this fantasy-drama comic pull you right in and leave you wanting more. Its adult themes and mature writing style set this comic up for a not-so-Disney kind of story. It’s not rated 17+ for nothing!

After playing The Wolf Among Us and getting to know Bigby and Snow by just a fraction, I was eager to know more about them. Legends of Exile give us another peek at Snow White’s life and back story as Bigby shows off his detective skills and shows Snow White (again) why he was made Sheriff of Fabletown. You know you want to root for our favorite reformed villain, and this story arc gives you all the opportunity to do just that.

I literally gobbled up this story in one sitting and wanted to run back to the comic book store for the second book. Fables belongs on your shelf for just the fantastic story, but you’re actually buying it to cure that craving of good, mature, character development and mystery. You will rejoice for these fairy tales that are more aligned with the Grimm Tales that Disney ever was and set in modern day.

Bottom Line: If you wanted Disney to be more up front about the real Grimm Tales’ characters, it’s time to pick up Fables and dive into the grungy world of Fabletown and its inhabitants.