So… If you have seen images and screenshots relating to Lollipop Chainsaw, you may be scratching your head wondering what in the world does killing zombies have to do with a half naked cheerleader, and why is there a man’s head on her hip? Well, it got my attention, enough so that I just had to get my hands on and play this all the way through in a matter of hours (definitely not at 100% completion though). 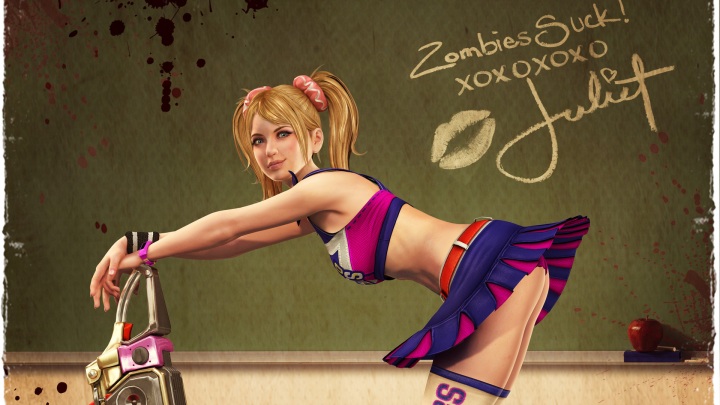 Brief intro: Juliet Starling is a normal high school student. She’s a cheerleader, has a sweet boyfriend, and even rides her bike to school. But Juliet has a dark secret…. She’s a zombie hunter. On the morning of her birthday, there’s a zombie outbreak. Juliet, with help from her body-less boyfriend, two sisters, mom, and dad, must defeat the zombie apocalypse her classmate has unleashed upon the town before all hell breaks loose (literally).

Review: Let me be perfectly clear with all of you: I do not typically like zombie games. Shocker. Mostly due to the fact a majority of zombie games are first and third-person shooters, I just do not enjoy them. There’s always exceptions to the rule, but luckily Lollipop Chainsaw is not a FPS. One of the reasons why I picked up this game is because of her weapon. While it may not be completely “original,” it was definitely creative in ways I haven’t seen before. During the game play, your chainsaw gets upgraded quite a few times. You’re no longer just cutting through zombies, you also get to shoot them with your chainsaw blaster!

Now if Juliet’s weapon didn’t intrigue you, her outfit most likely did. You start off in her cheer-leading outfit, and along the way you unlock more and more outfits. At the very end you get exclusive outfits. Depending on your platform, there’s different ones. I was pretty excited to get the High School of the Dead costumes. You can dress her up on the main screen and change outfits after level completions. I’ve always been a sucker for games that have alternate outfits.

There’s several different ways to kill zombies. Juliet can use her cheer-leading and martial arts moves, her chainsaw, chainsaw blaster, or Nick. Nick is the body-less boyfriend I mentioned earlier. When you get Nick Tickets, the press of a button will bring up a roulette game and if you choose correctly, you get that Nick move to kill off zombies!

Now to get new moves and outfits, not only do you have to progress through the game, but you can also buy these in the Chop 2 Shop. When you kill zombies and get specials (like killing several zombies at once) you get coins to spend at the Chop 2 Shop. The Chop 2 Shop houses special moves for Juliet and Nick, outfits, songs, health items (like lollipops), upgrades, and Nick Tickets.

If you like to collect items, there’s also special lollipops and other items to collect throughout the game. These items go in the main menu called Juliet’s Stash. In the main menu you can also create your own soundtrack (just add songs you have/bought from the Chop 2 Shop), see a moves list (How to Cook Zombies), etc.

The soundtrack is also really awesome. Someone must have really did some research for this soundtrack because all of these “modern” hits revolve around the game. The licensed songs feature artists like The Chordettes, Five Finger Death Punch, Dragonforce, and Arch Enemy.

Bottom Line: If you enjoy killing zombies and great zombie-killing music with kooky banter and an interesting take on stereotypes, Lollipop Chainsaw is right up your alley.