Sword Art Online is an adaptation of the manga of the same name. You can find it on Netflix. It’s English dubbed too, for fans who prefer dubbed over subtitles. There are 25 episodes available right now. The first half takes place in a virtual world called Sword Art Online (SAO) and the second half takes place in a virtual world called ALfheim Online. The first half is much more teen friendly than the second half if you’re worried about that kind of thing. However during the second half, it gets disturbing towards the end. Trigger Warning: Rape-y Behavior. 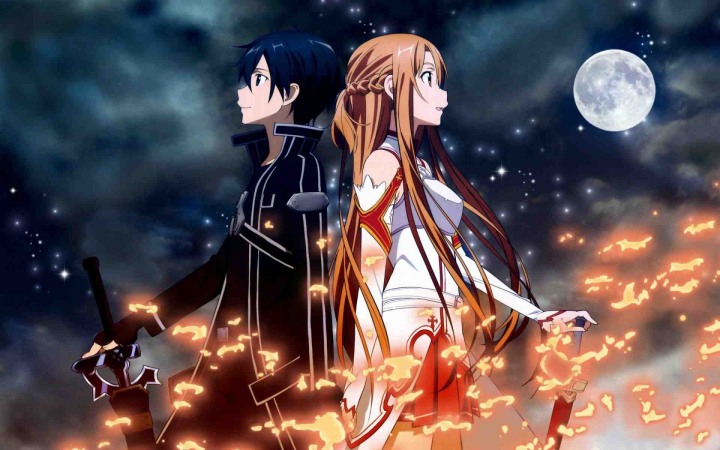 Brief intro: Sword Art Online takes place in the near future. It’s a Virtual Reality Massive Multiplayer Online Role-Playing Game (VRMMORPG) in which players use Nerve Gear, a virtual reality helmet that allows players to use their five senses to experience the game and control their in-game characters with their brains.

The players log in for the first time inside of SAO, and later discover that they cannot log out. They are then informed by SAO’s creator that if they wish to be free, they must reach the 100th floor of the game’s tower, a tall tower inside the game full of monsters and bosses players must defeat to reach the next level, and defeat the final boss. The twist: if their characters die inside the game, their bodies will also die in the real world.

Our story is centered around Kirito, who was chosen as one of the beta testers in the closed beta of SAO. Since he has previous experience and knowledge of SAO, he feels that he can beat the game and save everyone. Along the way, our lone hero makes friends and even falls in love.

Review: *swoon* I love a good romance, and this is definitely a great romance! It also has plenty of action and fight scenes for those of you who like a good sword fight. And on top of all that, they’re inside a game! How cool is that? You’ll be thinking about being inside your favorite MMORPG while watching SAO, and it will not disappoint you.

This anime has something for everyone and if you enjoy video games as much as I do, I highly recommend it. The chicks are just as bad ass as the guys. They incorporate so much of what MMORPG’s are about. They talk about their skill levels, demonstrate these skills. You see them upgrade weapons and armor and work in guilds and alongside strangers. It really is an amazing thing.

On the deeper side, SAO gives us a sense of time with our beloved characters. We see them evolve and change, and what the virtual world does to their inner selves. We also see how the in-game experience creates a society. We have the hard-core gamers, who forget about people being real and still feel the need to play it as a game. We have the kids and inexperienced players taking shelter under those who provide shelter and experience.

We don’t just follow the same story of our hero taking down floors inside the tower through each episode either. We see mysteries unfold, friendships formed, love blossoming before our eyes. The “filler”episodes still contribute to the whole story, which anime often has a hard time doing.

Our love story brings light to virtual relationships as well. I can’t elaborate too much on this due to spoilers, but it doesn’t just end inside the game.

While SAO is fun and full of fantasy and triumphs, it is also tragic. I think that’s one key thing in this anime that keeps it’s viewers coming back. We cry and swear but we root for our hero to win, win for the tragedies that take place so that they were not in vain.

So, you should watch SAO if you like gaming, fantasy, action, and romance all rolled up in a nice (currently) 25 episode anime. If you can hang on through the tragedies, I promise it’s worth your while!